Booting from a networked volume can be initiated either by holding the N key as your Mac starts up or by selecting a network volume in the Startup Disk preference pane. 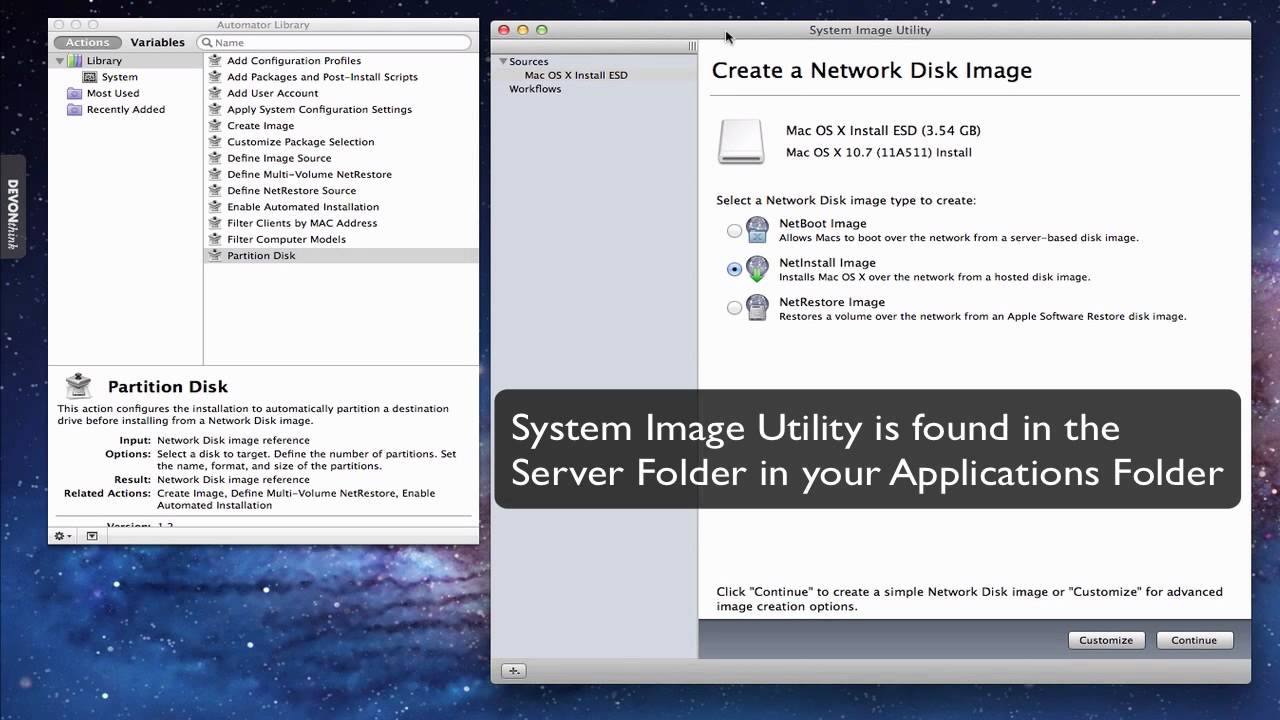 Apple provides tools for the creation of bootable images, though third parties like DeployStudio also use the technology to simplify OS X imaging and deployment for larger numbers of computers. Apple distinguishes between three different kinds of bootable volumes: To store user files, NetBoot images can use space on the local Mac's hard drive, or they can be "diskless" images that store user data on the server and allow the built-in hard drive to be completely unmounted—useful for disk imaging and diagnostics.

Second, there are NetInstall images, which are more or less network-hosted versions of OS X install media. We need to attend to a couple of things before we can flip on the NetInstall service: You'll only really need to worry about the latter if you're configuring diskless NetBoot images. The last step is to give the service an image to work with—this is a job for the System Image Utility.

The System Image Utility is buried in Server. By default, it gives you a simple menu that you can use to make NetBoot, NetInstall, and NetRestore images from either a bootable OS X volume either on an external disk or a separate volume on the Mac's hard drive; you cannot make an image of the boot volume or a Mavericks installer located in the Applications volume if your installer was deleted during an update from an older version of OS X, it can easily be re-downloaded from the Mac App Store again.

This can make it a bit tedious to create images for multiple OS X versions if you need to support older Macs dropped by newer OS X releases. For our purposes, let's just download the Mavericks installer from the Mac App Store and create a basic NetInstall image of it so that we can install the OS on our Macs without having to re-download the installer a bunch of times or tote around a USB drive.

One handy addition in Mavericks that wasn't present in Mountain Lion is the ability to create an Administrator account that will be configured automatically on every Mac that installs OS X from your image. This will save home users a couple of configuration steps, but it's more useful for businesses that use a local administrator account on all of their computers for use when troubleshooting or fixing things.

Name the image whatever you want, create an Administrator account if you'd like, and click Create. Great article but there is one little thing I would like to add. With OS X Server 1. I found this article: My question… Is there any way around this? Not my favorite thing.

Make no changes to the Image Index. For On OS X Server This is usually done for the purposes of recovering files, running diagnostics, or installing clean or pre-configured OS X images on Macs. I mount the image I just took and capture it.

There are other issues with RAIDs as well. I should write a top 10 list on that, or something…. Everything works great on the local subnet but when moved to the data center I cannot netboot across subnets.

But it fails to see the images on startup with the Option key pressed. And fails to boot to the default image when N is pressed at boot. Any advice would be appreciated. I have a new ML server setup no migrated with several NetBoots which are all bootable and working fine. None of them are working in diskless mode though. They all have the checkbox checked for enabling diskless and I can see the shadow file being created.

I have set logging to HIGH but not seeing anything obviously in the logs. Is there anything else you can think of to look at to troubleshoot this issue? I had an issue like this recently and it was with the permissions on the NetBootClients0 directory. But my issue was similar.

I would enable DHCP on the server temporarily and plug directly into it. If you boot holding down the option key you should then see the NetBoot set provided the client gets an IP, etc.

Sep 28 Exited with code: Another update. I hooked up the client to the server with a crossover cable and enabled DHCP. The NetBoot set popped up on the client and I selected it. However it just sat there for a lot time before rebooting and upon looking at the logs it just repeated the same 4 actions over and over. COM bootpd[]: ACK sent Set the gateway to the servers IP and it should fix that error. Thanks for your prompt replies! I finally got our network guys to set up DHCP on the subnet the real server was on and was able to image on the same subnet.

The NetBoot service has allowed administrators of Mac OS X computers to leverage images hosted on a server to boot computers to a central location since OS X was first introduced by Apple. In the Server app, Apple has added a number of options surrounding the NetBoot service. It is now called NetInstall.